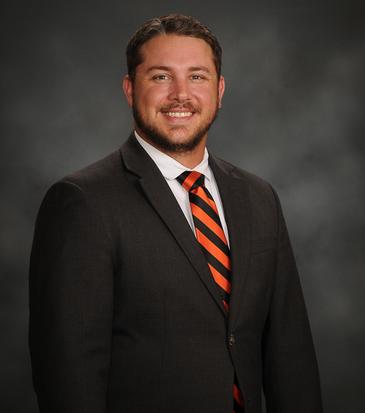 Mr. Brandon Self is in his seventh year as Director of the Rambler Bands at LaFayette High School, these include the Rambler Marching Band, the Concert Band, the Symphonic Band, and the Jazz Band.  He is also responsible for the LHS Visual Ensemble.

Mr. Self is a native of Walker County, having grown up in Chickamauga, and is a graduate of Gordon Lee High School.  He graduated from Jacksonville State University in 2012 where he earned a Bachelor of Arts in Music Education, earning a Master of Arts Degree in Music Education in 2014.  While at JSU, Mr. Self served as a drum major for the Marching Southerners and participated in a variety of performance and competitive ensembles such as the JSU Wind Ensemble, the JSU Tuba/Euphonium studio, and the pep band Hardcorps. He was also a member of Spirit from JSU Drum and Bugle Corps (now known as Spirit of Atlanta) and the Phantom Regiment Drum and Bugle Corps. He is a member of the International Tuba Euphonium Association, the National Association for Music Education, and Phi Mu Alpha Sinfonia.

Please join us and continue to support Mr. Brandon Self & the Rambler Band program! He has already done great things with our band.  We look forward to watching what Mr. Self does with the music program at LHS as he grows the program and continues the Rambler traditions!